The Best of Company 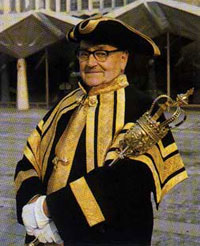 THE WORSHIPFUL Company of Glovers, the Butchers, Bakers, Horners, Turners and Scriveners, the Makers of Playing Cards, the Woolmen, Apothecaries, Glaziers and Painters of Glass. It is such a colourful prism of names that the imagination runs riot and one can only wonder how the curious tradition of Livery Companies began.

In medieval England "livery" was the term used to embrace the clothing, food and drink provided to officers and retainers of great households, such as those of bishops and barons, colleges and guilds. Later the term came to signify the distinctive clothing and badges worn as a sign of protection and privilege. Throughout Europe guilds were set up to act as a support system for all sorts of craftsmen, the forerunners of the trade unions.

"Guild" derives from the Saxon "gildan," meaning "to pay." Members paid to belong in the same way that they pay an annual subscription to a trade union today. The most popular route for admission to a craft was through apprenticeship, with a young person being taught by a master, normally for seven years, after which he could claim his "freedom."

"The freedom of the City of London" was a prerequisite for anyone wanting to keep a shop or exercise a trade or craft within the City walls. With it came many advantages, including freedom from impressment into the armed forces by press gangs. 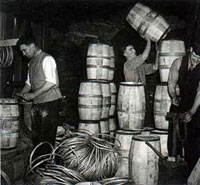 Even today freedom of the City is a crucial qualification for the holding of civic office. The livery companies continue to help to educate and train young people, to support colleges, hospitals and industry and to donate generously to charities.

The City of London still richly evokes that time when it all started with street names such as Cloth Fair, Bread Street and Milk Street and Ironmonger Lane where traders and craftsmen clustered to carry out their business.

A fraternity or guild protected employees and customers, as well as employers, by seeking out inferior work or shoddy goods and checking their weight and quality as well as regulating wages. Fines were heavy and could lead to ruin due to expulsion and loss of livelihood. Disputes were settled by arbitration in the livery company halls, which were also used for recreation.