I received no formal art training but did have an encouraging and enthusiastic art teacher at my school, Saint Joan of Arc’s Convent in Hertfordshire. I learnt techniques in oil painting through my friendship with the Australian Boyd family while living in London in the late 1960’s and 1970’s.

My first one-woman show was at the Langton Gallery in Chelsea, London in 1979, followed by a second in 1981. In 1983 just before my third one-woman show, forty-one of my paintings were stolen from our car in London and were never found. This meant that from 1981 until late 1985 I was unable to exhibit.

My next one-woman show was in the Autumn of 1986 at the Addison Ross Gallery, London.

I have painted sporadically in the last decade due to many other ventures and projects taking priority. However I have been producing a new form of work which I am developing which involves using driftwood, found objects and small items like shells, buttons, keys and paper money, broken china and more or less any item that catches my inner eye. I am combining objects which appeal to me that convey an undercurrent of archetypal imagery, abandonment and humour.

My direct ancestor, Jan van der Heyden (1637-1712), Dutch Master and inventor, has recently occupied two rooms of the Reijksmueum in Amsterdam (February 2nd – 30th April 2007) with his paintings and engravings of his designs for the fire hose and engine which he invented. I will create a section about him under Family and I am grateful to him for his creative genes. My grandmother on my father’s side was Flora van der Heyden.

Below is the the cover of the booklet that accompanied the exhibition. Please click on the cover to view the entire booklet (it is a 9.6MB PDF file so will take some time to download): 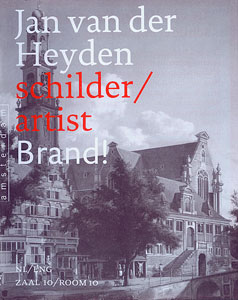 APOLLO MAGAZINE has said of my work:
'A lyrical escape into idyllic aspects of landscape is a refuge many would like to take and Olivia Temple's talent enables her to do it with paint in an uncomplicated enjoyment of nature.'